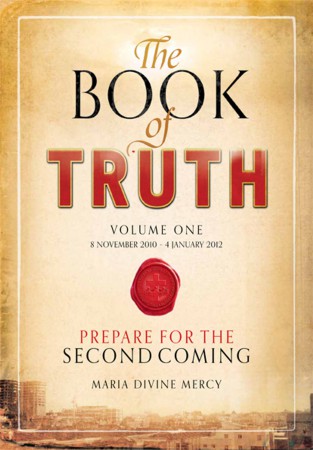 The Book of Truth is mentioned in Daniel 10:21.  This is where a mysterious Book of Truth is referred to.  Gabriel explains to Daniel that everything that has been revealed to him about the future and the end times is to be found in the Book of Truth.  Daniel is told to seal it up as it is to be left to another time called "The Time Of The End."

ACCORDING TO THIS BOOK THIS GENERATION WILL WITNESS THE SECOND COMING OF CHRIST.

Here you will find a series of divine messages a European woman, known as Maria Divine Mercy, has received from God beginning 8th November 2010.

Although Maria had little knowledge of the Bible, the messages are littered with numerous biblical references, codes and secrets including:

Jesus, the Lamb of God, is now opening the Seals and the secrets contained in the Book of Revelation through his 7th messenger.  Maria is the 7th messenger sent to prepare the world for the Second Coming of Christ.

To order copies of the Book of Truth (5 Volumes)

According to the Messages of the Holy Trinity given in the Book of Truth, the Second Coming of Our Lord Jesus Christ will happen in our lifetime. We are now living in the End Times, or the times immediately preceding the glorious Return of Jesus Christ, Our King.
The Book of Truth, revealed to the Prophet Daniel and in part to St. John in the Book of Revelation, is the promised gift from God for the End Times.
“But you, Daniel, shut up the words and seal the Book, until the time of the end. Many shall run to and fro, and knowledge shall increase.” (Daniel 12:4).
The Book of Truth is a gift given to us by the Holy Trinity to prepare us for the difficult times we now face, as the world goes into turmoil in the lead up to the Second Coming of Jesus.
In this one-hour webinar, you will be given an overview of the important Messages given by the Holy Trinity in the Book of Truth. You will also learn about the prophecies foretold in the Book of Truth that have already taken place and will still take place.
It was not until the incredible prophecy on the resignation of Pope Benedict XVI was fulfilled that people started taking the Book of Truth seriously.
On February 11, 2012, the Lord Jesus Christ gave this incredible prophecy, which was published all over the world at that time:
“Pope Benedict XVI will be ousted from the Holy See in Rome. A plan to destroy My Holy Vicar was devised in secret on the 17th of March 2011, and this will come to fruition, for it has been foretold.”
– Your Jesus.
And on February 11, 2013, exactly one year later, to the day and the hour, Pope Benedict XVI announced his resignation.